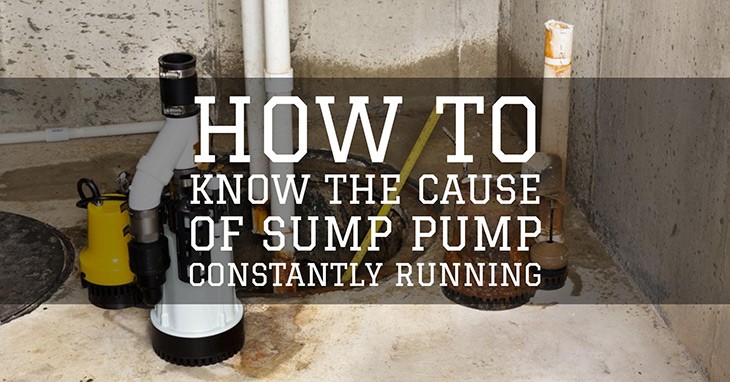 Stuck Switch – Your sump pump has a float switch which turns on the device when water level rises in the pit. Sometimes, a float switch will get stuck in the “on” setting, which could happen because of jamming, clogging or tangling of the switch in the system. This will cause your machine to run continuously.

Not Enough Power – These devices have a certain value of horsepower. That is the amount of work they can do. If the pump is too small for the application you intend to use it, it will run almost continuously and break down sooner than later. It’s better to invest in a strong machine from the start which will be up to the task you throw at it.

Faulty or Missing Check Valve – The check valve is installed on the discharge pipe to make sure that none of the water that passes the point, returns to the sump pit. If in any case, a check valve is missing or not there in the first place, water that doesn’t cross the point where the pipe runs downhill will return back to the pit. The pump will activate again in order to push it out. Until all the water is pushed out, this process will be repeated nonstop. This will wear out the sump pump earlier than expected. Neglecting this issue can turn into a big problem, while the earlier fix is rather inexpensive.

Small Liner – If the liner is too small, but the pump is powerful, what happens is that it will discharge water faster than the liner will fill. The device will turn on and then off and then on again. This will severely decrease the life of it.

Continuous Flooding – Although it’s generally considered a good thing to dig your pump deep in the ground, it can affect the running of your sump pump. This would occur if the water table is present right under the basement floor. If left unsolved, your pump will run continuously, and it may give up when the flood gets even worse during heavy rain. In such a case, your basement will flood and it would cost you more than the repair’s cost.

Leakages – You might have a sprinkler in your yard broken somewhere from underground or a leaking sewer pipe under your floor. This would continuously flood the pit with water. The pump would have to work continuously in order to pump the water out. So we see that even a minor external problem can cause a big problem. This can even lead to foundation heaving or other bigger damages to your home.

These above mentioned scenarios are some of the most common factors that cause a sump pump to run continuously. Such an issue should be noticed as early as possible and if you don’t bother to take.