Wayne’s sump pumps often appear similar to the layman, and this makes some users consider them to be similar in configuration. However, they are never quite identical in terms of the features and performance offered. This is not to say that the products of Wayne are anything but value for money, but rather that they offer value in different ways.

We saw that the Wayne 58321-WYN3 Submersible Sump Pump combined excellent motor horsepower with a great all-round design. The Wayne CDU800 offers an equally wide range of features, but is placed in a lower horsepower bracket and boasts of a cast iron construction. This, along with the price difference, makes it foolish to consider the similar looking pumps as similar in specifications. Indeed, we need to study the CDU800 carefully so as to gauge its quality and efficiency as per the benchmarks of its price range. As we mentioned above, Wayne pumps generally have a standard design comprising of a rather thick motor housing, a well molded discharge and the switch assembly. Together, these ensure that the product is compact and does not possess any protruding parts that may hinder the flow of water or get damaged by solid particles in the sump.

The Wayne CDU800 1/2 HP Cast Iron Submersible Sump Pump follows this tried and tested design, except that unlike many similarly priced sump pumps (of both Wayne and other companies), it makes use of cast iron instead of steel. As is well known, cast iron is regarded as more sturdy and capable of handling extreme water pressure during storms, etc.  Furthermore, there is a layer of corrosion resistant coating, which ensures that the housing does not rust.

If that weren’t enough, the base of the pump is made of cast iron as well, thus avoiding the longevity problems associated with materials like plastic.

The discharge of the Wayne CDU800 is made of high quality cast iron, which insures this vital part against damage due to impact from heavy pebbles ,etc. Further, it is so designed that it efficiently assists the motor in removing the maximum amount of water without getting clogged with debris.

Finally, the fact that the discharge has a 1-1/2” NPT diameter ensures that most standard pipes of this diameter can function with this sump pump, thereby saving one the trouble of using valves, etc to reduce the pipe diameter.

The power cord is fully insulated and fully submersible, thereby allowing the user to install the sump pump without having to worry about electrical shocks, etc. Furthermore, the power cord is of decent length, which precludes the necessity of there being multiple modifications to the electrical wiring of the house before the pump can be used efficiently.

Finally, Wayne has provided a stainless steel handle for the pump, which is fixed and cannot be bent as per convenience. This, and the fact that it is rather small for a person with large hands, makes the handle one of the rare shortcomings of this sump pump.

The heart of any sump pump is its motor, and thankfully, the Wayne CDU800 comes with a powerful 1/2HP motor that is capable of working for long hours without suffering any decline in productivity. In fact, it can achieve a consistent output of 3900 gallons per hour at 5’ head. Further, it has a decent maximum head of 20’, and unlike a lot of sump pumps which achieve only weak outputs at their highest certified heads, this product pumps a decent 600 gallons per hour at its maximum head.

Complementing this excellent motor is the sealing. Wayne has used a superior ceramic seal which allows neither water to flow into the motor nor oil to flow out of it. Coupled with the superior quality well-oiled ball bearings, these make this device one of the best sump pumps in terms of motor and sealing quality.

Wayne knows the importance of using an impeller that can run efficiently even when it is assaulted by pebbles and other solid particles that are swirling around with the water in the sump. Cast iron has proved to be the best solution in this situation, and hence, we find that the Wayne CDU800 has been provided with a high quality cast iron impeller. Even better, the impeller’s design allows it to move water at a rapid pace such that the discharge can efficiently transfer it into the outlet pipes even during the height of the rainy season, when flooding is a real possibility.

The switch assembly is composed of a thick but highly reliable PVC float connected via a steel arm to the switch. When the water rises, the float is pushed upwards, applying pressure on the arm and thereby triggering the switch. The switch itself is a bipolar one with a provision for auto-shutdown should there be great fluctuation of power supply and/or extreme heating of the motor. This ensures that the switch doubles up as a safety mechanism that ensures the security of both the sump pump and the wiring of the house.

Finally, the CDU800 is protected by a stainless steel switch guard which extends to a distance just sufficient for protecting the large float. Some users complained that the steel could on occasion be dented if the pump collided with the sides of the sump, but they added that despite this denting, the guard continued to serve its function of protecting the switch well.

The CDU800 Submersible Sump Pump was universally praised for being small enough to fit in almost any sump, and being sturdy enough to survive even the peak rainy season water pressure. Further, users noted the ability of the motor to remove water even when the outlet gradient was steep and high.

Finally, users were impressed by the ability of the switch to turn on and off at short intervals based on fractional changes in the water level. On the flip side, a minority of users complained of the handle being hard to grip, and in a few rare cases, the switch guard being dented due to a hard impact during installation

The Wayne CDU800 brings the best of Wayne’s expertise in building quality products that are both powerful and compact. Though this perhaps led them to sacrifice a larger handle for a smaller one, the ability of this sump pump to pump impressive levels of water even at an exceptional maximum head, the exceptional performance of the impeller and the efficiency of the discharge prove that Wayne left no stone unturned to ensure quality in the core parts of this pump.

Indeed, if we consider these features alongside the 3 year warranty that is offered by Wayne, we realize that this product is a strong competitor for the position of the most reliable sump pump in the sub-$200 price bracket.

Superior Pump 91330 Review: Is It Good for My Basement? 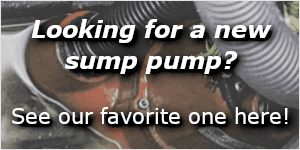